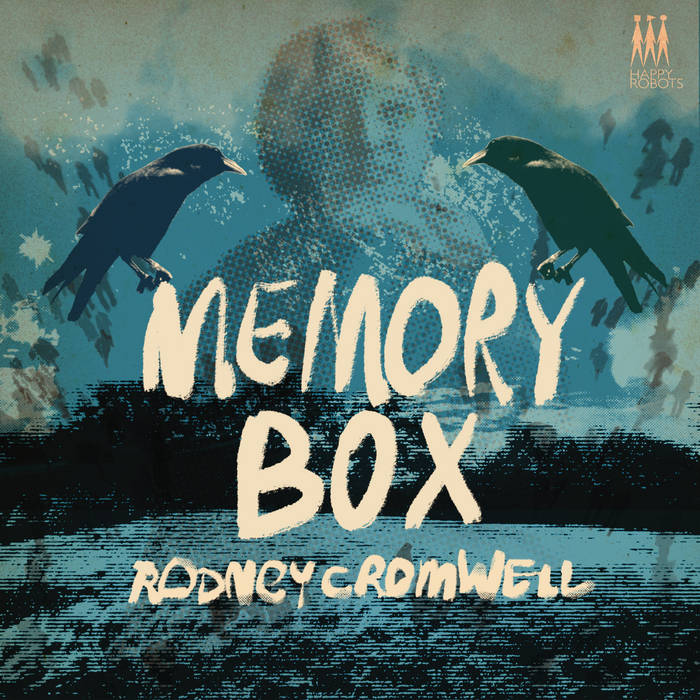 'Memory Box' - the new album by Rodney Cromwell - fuses a European synthpop sensibility with a world of magical realism. It was inspired as much by the literature of Alice in Wonderland, Franz Kafka and Anna Kavan, as by its musical influences of artists such as Kraftwerk, Neu!, The Cure, Silver Apples, Oppenheimer Analysis and Polyrock. The sonic pallet of 'Memory Box' is rich, colourful, often surprising and utterly unique.

Opening with two synthpop numbers, the dystopian coldwave of ‘Intercom,’ with its twisted robot voices, that promise us “order will be resumed shortly.” This order comes swiftly in the form of ‘Opus Three’ a pounding dance-floor filler, reminiscent of the best of Vince Clarke, that asks us to dance in the face of "catastrophe".

With the haunting title-track ‘Memory Box,’ the album plunges down a psychological rabbit hole, of half-remembered memories and half-formed truths, where sweeping synths traverse a sonic landscape, that yank the mundane into the sublime. The album’s central songs journey us deeper into this theme with Kafkaesque abandon; ‘Fluctautions’ is a pounding krautrock number about the dangers of TV shopping, ‘Waiting Room’ is a love song for exhausted souls, while the uplifting glam-stomp of ‘Wristwatch Television’ looks towards the utopian future promised in 1950’s style magazines, but never delivered.

“Calculations’ a melodica-driven dreampop instrumental, melds Brian Eno with Mogwai, pulling us back towards reality. The album closes with its purest synthpop number ‘The Winter Palace;’ layered with ice-cool ARP synth strings, thin vintage drums and lush harmonies, as Cromwell sings of a love bound by "drudgeries hold".

‘Memory Box’ was recorded in Cromwell’s home studio in Catford, South London in 2020 & 2021 and was mixed in Brooklyn, New York at ACME Hall Studies by Rich Bennett.
​
Since the release of his debut 'Age of Anxiety' album in 2015, Rodney Cromwell has been featured by the likes of NME, Electronic Sound Magazine, Huffington Post, Paste, BBC6 Music and national RNE3 in Spain for whom he recorded a live session. 'Age of Anxiety' was included in a wealth of Best of Lists, not least that of Electronic Sound. He has appeared on compilations alongside Cavern of Anti-Matter, John Foxx, Devo, OMD, Katy Perry and many more.

Rodney Cromwell is the project of Adam Cresswell. The first band he founded was SALOON, who were John Peel darlings, who recorded three Peel Sessions and the Festive 50 number 1 of 2002. They released three acclaimed albums on Track & Field (UK) and Darla Records (US) and played with a host of alternative acts including Stereolab, Electrelane, Quickspace, Laika, Of Montreal & Movietone. He followed Saloon with ARTHUR & MARTHA the acclaimed tweetronica duo that released the sole album ‘Navigation’ before vanishing. In addition to performing as Rodney Cromwell, he runs the Happy Robots record label.

QUOTES
"If you like analogue synths and old drum machines, you'll soon get lost in this amazing album 10/10 ' Stephen Roper, Author of Gary Numan Back Stage

"An essential addition to the collection of any electro-dance and synthpop / synthwave aficionado. Hands-down, this album numbers among the top releases of 2022" The Record Stache